Welcome to Music Friday when we bring you fun songs with jewelry, gemstones or precious metals in the lyrics or title. Today, Tony Award winner Patti LuPone calls Mr. Goldstone “a gem” in a witty tune from the 2008 revival of the 1959 Broadway musical, Gypsy. In the song “Have an Eggroll, Mr. Goldstone,” LuPone as Mama Rose tries to secure a contract with the Orpheum Circuit executive by showering him with flattery and offering all kinds of leftovers from a take-out dinner. 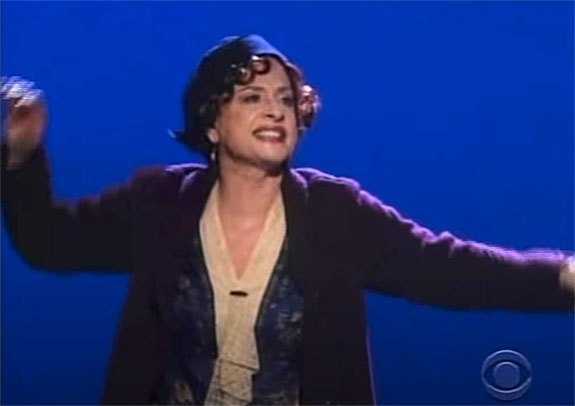 With music by Jule Styne and lyrics by Stephen Sondheim, Gypsy follows the lives of Rose, the ultimate show business mother, and her two daughters, June and Louise, as they navigate the vaudeville circuit during the early 1920s. Jammed into a small apartment, Rose and her girls are caught off guard when Rose’s boyfriend, Herbie, and Goldstone come by unannounced. Playwright Arthur Laurents cleverly uses the name Goldstone to convey the character’s wealth and power.

Gypsy opened to rave reviews on Broadway in 1959 with Ethel Merman in the lead role. Rosalind Russell and Natalie Wood starred in the big screen version of Gypsy in 1963 and the stage show returned to Broadway in 1974, 1989, 2003 and 2008. LuPone’s portrayal of Rose won her a Tony Award for Best Actress in a Musical. Critics have called Gypsy the greatest American musical.

Trivia: The Northport, NY-born LuPone played the part of Louise in a high school production of Gypsy when she was 13 years old.

More trivia: “Have an Eggroll, Mr. Goldstone” is the fifth song of Act I in the 2008 revival of Gypsy. The original name of the song was “Mr. Goldstone, I Love You.”

Please check out the audio clip of LuPone and the 2008 Broadway cast of Gypsy singing “Have an Eggroll, Mr. Goldstone.” The lyrics are below if you’d like to sing along…

“Have an Eggroll, Mr. Goldstone”
Written by Jule Styne and Stephen Sondheim. Performed by Patti LuPone and the Broadway cast of Gypsy.

Have a dish, have a fork, have a fish, have a pork.
Put your feet up. Feel at home.
Have a smoke, have a Coke.
Would you like to hear a joke?
I’ll have June recite a poem!

Have a Goldstone, Mr. Eggroll.
Tell me any little thing that I can do.
Have some fried rice, Mr. Soy Sauce.
Have a cookie, have a few!
What’s the matter, Mr. G?
Have another pot of tea.
Mr. Goldstone I love you!

There are milestones, there are mill stones.
There’s a cherry, there’s a yellow, there’s a blue.
But we don’t want any old stone,
only Goldstone will do!
Moonstones, sunstones.
We all scream for one stone.
Mr. Goldstone we love you!
Goldstone!